I had originally starting writing this long post and for some reason it didn't save :(    Now I am too annoyed to write it again.  GRRR Don't you hate when that happens??

Last week's weigh in was +0.1, I expected it and I am moving forward.  This month has been very hard and challenging, not one of my favorite months, that's for sure!   With the exception of Halloween of course.     This second half of this week has been better and I feel more in control of my eating.    Weigh in tomorrow we will see how it goes.

I did my 4th race of the year.  It was rainy, cold and windy but I am glad I did it :)  My wonderful mom and stepdad drove me to the race  to cheer me on.  Rob couldn't make it because he had to work :(   I beat my PR by almost a minute.  42:02 :)   I was running my last kilometer when I saw these two girls,  my first thought was oh that's so nice there cheering on their friend, as I got closer I realized it was my friends!   I was so touched that they came out in such crappy conditions.  They even ran the last part of the race with me!    I am one lucky girl.  I am not sure if I would to this particular race again ,  there was 300 people.  I prefer the bigger races but it was a learning experience.   I have one more race of the year, in December I think it's a Santa Race.  Should be fun!

PS  I finally tried a new recipe!!  I know shocking :0    Rob even liked it and went for seconds :P

Here's the recipe if you are interested.  It's super easy.

http://www.food.com/recipe/weight-watchers-sweet-and-sour-chicken-254056
Posted by Unknown at 3:20 AM 2 comments:

Starting this week my weight loss buddy and I decided to change are weigh in day from Monday to Wednesday.  To give us a bit more wiggle room if we overindulge over the weekend.  Plus I need a bit of a change.   I really do hope that our new leader is motivating :)    We are also were getting annoyed with this women who would talk the whole meeting how great she is, so annoying!  Crossing fingers there is not another women like that, I will keep you posted :)
Eating still isn't fabulous but in the past a couple of days I have a bit more of handle on things.  One day at a time right?   I am going to take your suggestions and try some crock pot recipes.  Lets hope I can cook something points friendly and yummy.
I weighed in this week and I am up 1.8 pounds :(   This journey is going to have ups and downs.  I have been on this journey consistently since 2009.  Do I wish I lost all the weight in a year?  Absolutely.  But life isn't perfect and there are struggles I have lost 50 pounds to date and have another 50 pounds to go.  I am half way there.  I have learned so much about myself and will continue to.  This is going to be something I will have to fight for till the day I die.  I may not have to fight as hard everyday but I still will have to  be mindful of everything I put in my mouth.
Can you believe I have been running for over seven months???   And ran over 200 km!   I have been focusing on running only 5km but I am thinking about stepping it up to 10km it's double the distance but I can do it!

I found this picture the other day.  I am 29 in the picture at my mother's retirement party.  I forgot how much I have changed in the past few year!

Recent picture of me trying on Halloween Costumes :)


I'm not expecting much of a loss this week but I am going to try to flush out my system with lots and lots of water :)
Posted by Unknown at 1:11 AM 1 comment:

I stayed the exact same, again!  It's time to switch something up in my diet or exercise.   Not sure what that is yet but I am working on it.   My eating the past two days haven't been great I have been feeling hungry all the time.  I hate that feeling :(    But I am not going to let these two days sabotage the rest of the week which is something I would have done in the past.  I want to be the healthy women I deserve to be  which I know is going to be hard work and so far I believe I have been doing well but I know I need to step it up!  I was thinking tonight about trying a new recipe each week.  I am not sure If I  have expressed how I am feel about cooking but really it's not something I enjoy doing.  I wish this wasn't the case but even if I don't love it is still something I have to do and maybe one day it will change into something I like.   I also think this will help with my boredom of food.  I wish I could be more like my boyfriend.  He can eat the same things over and over again it doesn't bother him.   If I ate the same thing too much I get so sick of it and I don't want to eat it again.
Now on to a couple of happy things:
Rob and I, over the past few years have really enjoyed Halloween and picking out fun costumes.  I have always had to pick out a plus size costume.  This year... I was able to wear a Large!!   I couldn't believe it...   I am going to be Cookie Monster :)  Even though my costume looks more like Cookie Monsters Girlfriend lol.
Finally I can cross another thing off my long term goals.   I finally tried a Kettlebell class.   It was actually TRX/Kettlebell.  I loved how challenging and sweaty I was after the class.  I was able to keep up with most of the routines.  I only had to modified a few things.   The people in the class were really nice and helpful.  The instructor was a little strange he was talking like a game show host which  I thought was odd lol  but whatever it helped distracted me when something was really difficult.    I wanted to take a picture of myself with a kettlebell but I was too shy.  So I took an after picture of my sweaty self. 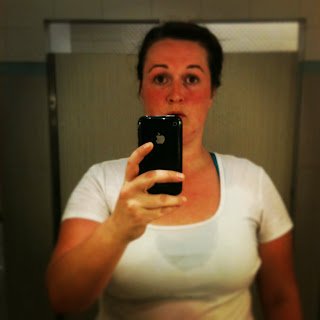 When you are the bully

When I was at my heaviest, at 274 I avoided mirrors.  In my head I didn't think I was fat.  I  had lots of friends, a family who loved me, an amazing boyfriend.  Even at my heaviest there was very little standing in my way.   Lately I have been noticing since my recent 30 pound loss and 50 pounds to date.   I am constantly looking in the mirror not because I am being vain.  I am looking in the mirror picking apart my body.  Staring at my cellulite thighs, looking at my hanging stomach, grabbing my back fat and wishing it wasn't there.  I am a bully to myself, ridiculing myself everyday.  Saying how ugly I am.   I didn't do this at 274??  Well, not nearly as much as I do now!  Why I am doing this at 223?? The other day I decided to stop being so awful to myself and to really look in the mirror at what I did like instead of focusing on the latter.   I like how my arms and shoulders are looking stronger.   I am exciting to see my cheekbones and my jawline.   I like my upper abs and how I am slowly starting to see definition.  I know this is going to take a lot of practice to be kind to myself and I know intellectually I should be proud of all the things I have accomplished thus far but my heart hasn't caught up yet.   Practice makes perfect right??
What are two things you like about your body??
Thanks for reading.
Posted by Unknown at 1:52 AM 2 comments:

For this weeks weigh in I stayed the exact same.  For the month of September I lost a total of 2.3 pounds.  A loss is a loss but I am really aiming to lose 4 pounds a month.    I cancelled my old gym membership at Goodlife Fitness and switched to The Athletic Club the classes are way better and I can't wait to try them all.  My mom also is a member so we can have some workout sessions together.   It is now October and I am challenging myself to take 3 yoga classes a week.  I have been under the weather with a cold.  Which blows literally :(  on a plus side my appetite is gone lol.
I have been keeping track of my runs and workouts.  Here's the proof :) 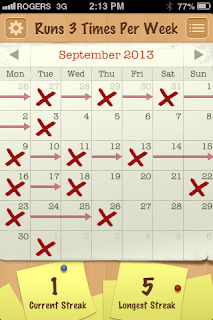 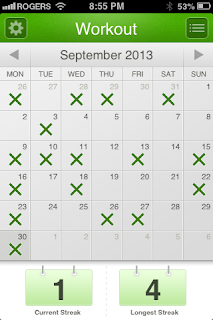 Posted by Unknown at 2:36 PM No comments: